On June 28, 1969, the front page of The Daily Iowan carried a story about a new parking ramp proposed for the downtown district. A riot at a run-down bar 1,000 miles away didn’t make a single local paper. A group of queer folks had finally taken a stand against the homophobia and police violence that plagued the country, but at the time, it didn’t seem important. It certainly didn’t seem news worthy.

By the next year, however, queer news made it into local papers. Iowa City had a chapter of the Gay Liberation Front, an organization founded in New York merely a year before. According to their statement of purpose, the GLF was “formed with the realization that complete sexual liberation for all people cannot come about unless existing social institutions are abolished”. They looked for a more inclusive family structure, and their leaders forcefully opposed militarism, racism, sexism, and consumer culture. 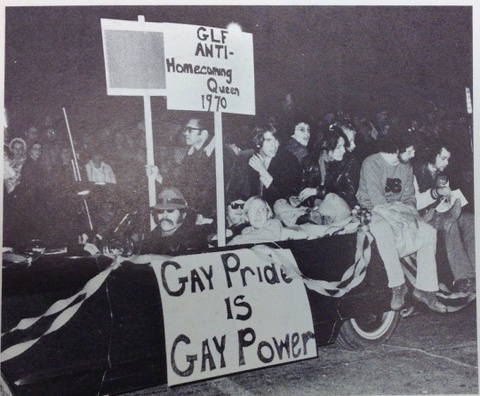 Iowa City’s chapter of the organization was part of the university’s 1970 homecoming parade. They appointed their own “anti-homecoming queen” and threw candy kisses to excited children and carried signs advocating for an end to classism, sexism, racism, and homophobia. The GLF was the first queer organization to be recognized in the University’s yearbook, and in Iowa City, they organized spaces for gay men to meet and exist in safety and often worked to protect queer spaces.

The Women’s Liberation Front, an umbrella organization connecting radical feminist groups around the country, also gained steam in Iowa City in 1970. They published the first issue of a newspaper titled Ain’t I a Woman, which dealt with queer themes from the outset. At the time, the Iowa City chapter of the Women’s Liberation Front was one of the only movements of its kind to have a house in Iowa, and as such, it served as a central point of contact for many activists traveling cross-country. In June of 1970, they organized a group of people to travel to New York City for the Christopher Street Liberation Day March, a march commemorating the first anniversary of the Stonewall riots that was organized by a variety of queer activist groups, including the Gay Liberation Front.

The Christopher Street Liberation Day March was one of the first events aimed at bringing queer people together across gender, age, and racial barriers. It was organized to commemorate the events at Stonewall, but it became much more than that. Stonewall, the run-down, watered-down hole in the wall had become a symbol of queer liberation and the need to fight for safety, respect, community, and the right to have a place to dance. The march was a celebration of that fight, and of a night when the queer community won. It took the queer liberation movement to Central Park, bringing thousands of queer folks with it. And, thanks to the work of the Iowa City chapter of the Women’s Liberation Front, queer Iowans were right there, too.

Union, fighting for employment rights for queer folks, while the newly-formed Lesbian Alliance worked with the Women’s Resource and Action Center to provide queer voices in many of its programs. In 1975, eight hundred people came to Iowa City for the Midwest Gay Pride Conference. In 1978, Iowa’s Supreme Court struck down all sodomy laws, and in 1996, Iowa City was one of the first U.S. cities to ban discrimination based on sexual orientation and gender identity. Though the groups that began the fight for this progress may not have existed to see it to fruition, the people who belonged to the groups catalyzed by the events at Stonewall certainly were. Many of them are still active in our community today, and are here and queer as ever.

University of Iowa Library - LGBTQ Resources: A curated page listing many of the university’s collection pertaining to LGBTQ+ culture, theory, and history.

LGBTQ+ History in Iowa: Find both a statewide timeline and an Iowa City timeline here.