Marsha “Pay it No Mind” Johnson moved to Greenwich Village in 1963 with a high school diploma and $15 to her name. She adopted the name “Black Marsha” soon after and became a fixture in the Village, where she was instantly recognizable by her bold style, notably wearing flowers in her hair. As a poor, black, gay, trans woman with a mental illness, Johnson had all the cards stacked against her, but she refused to back down from anything. She was known for her bravery, generosity, and ability to captivate a room. 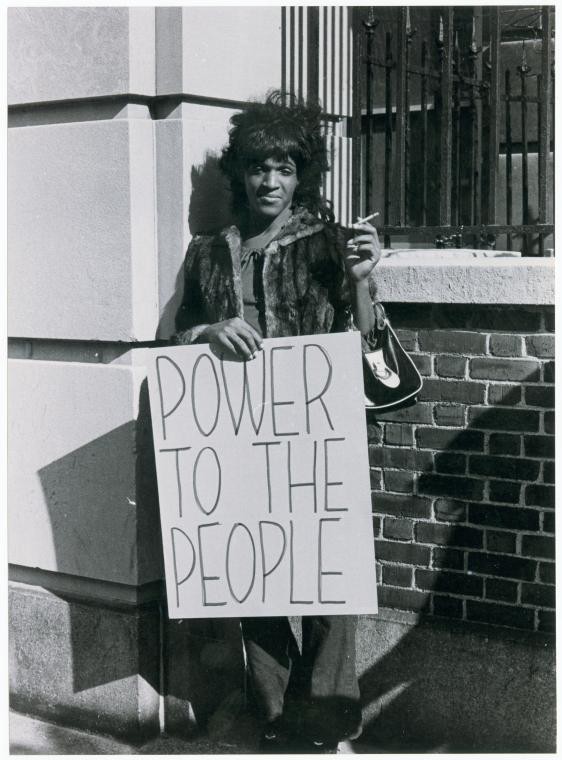 Her role in the Stonewall riots is up for debate, but multiple sources attest to her presence there. She explained that she didn’t arrive at Stonewall until “the place was already on fire”, but popular myth claims that she was the catalyst for the riots. Regardless of her role in the event itself, Johnson’s role as an activist cannot be understated. She co-founded STAR, the Street Transvestite (later Transgender) Action Revolutionaries, beginning by opening an apartment to homeless trans folks with the primary goal of keeping them fed and off the streets. While Rivera would eventually step out of activism after facing intense racism, classism, and transphobia from the frontrunners of the Gay Liberation Front and other organizations of the time, Johnson remained an outspoken activist and is known for her work advocating for the protection and acceptance of people with AIDS, which she was diagnosed with in 1990.

“Don’t let anybody tell you what to do, be who you want to be.” —Johnson, to her nephew

By 1992, she had become such a well-known fixture on the streets of the Village that it was a shock when she disappeared. Two days later, on July 4th of 1992, her body was pulled from the Hudson River. The NYPD initially ruled her death a suicide and refused to investigate further, despite protests from her friends and an eyewitness claiming they saw her fighting with a “bully” near the river that night. The case was reopened in 2002, and officially, it remains unsolved.

Pay It No Mind - The Life and Times of Marsha P. Johnson

Marsha P. Johnson, a black transgender woman, was a central figure in the gay liberation movement